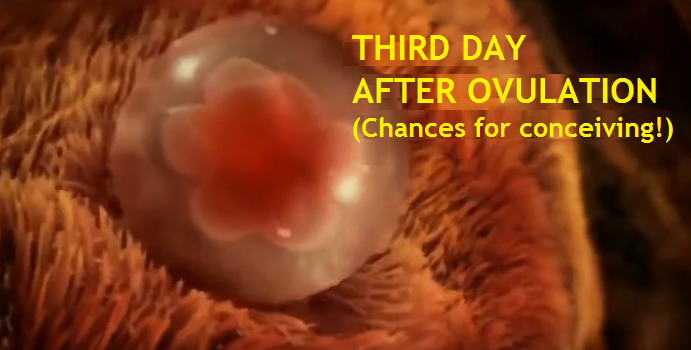 Even three days after ovulation, you can still get pregnant – only 0.35% of all conceivings occur as a result of intimacy in this period. A woman has all the symptoms common for the progesterone phase: engorged with fluid breasts, increased BT, cervical fluid is scarce creamy, sticky.

And if fertilization happened – what would happen to the embryo during this period? We will also tell you if it is dangerous if you feel some pain in the lower abdomen on the 3rd DPO? Read more below.

The probability of becoming pregnant on the 3rd day past ovulation

There are chances for pregnancy, but they are extremely small – only 0.35%. This is explained by the fact that the egg is capable of fertilization for only 24 hours, and on the third DPO, at least 48 hours will pass by.

So how then is pregnancy possible? There are several possible reasons:

Advice (!): To increase the accuracy of determining the date of ovulation, it is better to use several calculation methods at once, plus monitor your feelings (subjective signs of the egg’s output).

The feelings and discharge on the 3d day after ovulation

With the predominance of progesterone in the body, the nature of the cervical fluid changes. It is no longer as fluid and viscous as the days before ovulation. The consistency is creamy and cloudy-transparent, does not stretch.

Some women notice mild discomfort and pain in the lower abdomen. This is nothing dangerous, unless the pain is sharp and intense.

The reason for it is often that fluid has been released after rupture of the follicles, which irritates the walls of the peritoneum, which, in turn, causes the uterine contraction.

A doctor’s consultation is also required if, in combination with severe or strong pain, one of these occur:

Very often, at the same time with the rise of BT, the body temperature also rises – it may seem to a woman that she is shivering, a cold has begun. Such an increase will last an average of 11–13 days, that is, the entire period of intensive production of progesterone.

How does pregnancy develop on the 3rd day past ovulation

If conceiving occurred in this cycle, then on the 3-4th day past ovulation, the fertilized egg – the zygote — would move along the fallopian tube toward the uterus. By this period, it has been already shared several times and is consisted of 4-8 eggs.

On the third DPO (day past ovulation), the female body does not yet know about the conceiving that has occurred, but repeats the same process of preparation for the possible implantation from cycle to cycle due to progesterone.

Only after the embryo interpositions into the uterine wall on the 7th–10th day will the embryo begin production of HCG and it will be possible to establish the fact of pregnancy.