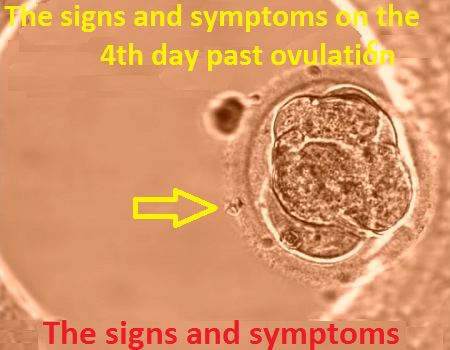 On the 4th DPO, after successful conception, women feel multiple symptoms. Characteristics for the second phase: increased BBT, tissue swelling, pain, increased sensitivity or bursting sensations in the chest, and minimal discharge (sticky, creamy). Pregnancy has not yet been manifested. It can only be determined after embryo implantation.

Next, we will talk further about the sensations and symptoms on the fourth day past ovulation. At what stage of development is the embryo, if it is there? And when to start doing pregnancy tests?

Pregnancy development on the 4th day past ovulation

Three to four days have already passed since the moment of fertilization, which means that the fertilized egg has divided and now consists of eight to sixteen blastomeres (cells produced by cleavage, cell division). For the first four days, the fertilized egg does not grow and remains only 0.14 mm long.

The zygote has already traveled down one of the fallopian tubes towards the uterus. By the fourth day, it finally gets into the uterus. Next comes the period of cell growth and their differentiation (separation) into 2 types. An embryo will form from one of them in the future, and a placenta from another.

Important (!): Before planning, it is very important to make sure that the uterus and ovaries are healthy and free from inflammation. During the inflammatory process, the mobility of the ciliated epithelial cells of the fallopian tubes is impaired. This means that it will be difficult for the zygote to move towards the uterus, because the coordinated movement of cilia in wave-like motions should push the fertilized egg to its cherished goal. An ectopic pregnancy is possible as a result of inflammation.

On the 4th day past ovulation (even in case of successful conception), there are no signs of pregnancy. This is due to the fact, that there has not yet been an implantation and the female body simply “does not know” of the occurrence. A woman during this period experiences the sensations usual for the progesterone phase.

This is interesting (!): There are occasionally cases of an early implantation, for example, on the fourth or fifth DPO. From the moment the embryo is implanted into the uterine wall, the hCG production begins and so the first signs of pregnancy appear, which indicate a successful conception, even before the delay.

If after the 4th day past ovulation, there is pulling pain and abdominal cramps (as before menstruation)?

Pain in the lower abdomen is possible for three general reasons:

At the fourth DPO, the basal body temperature is within the second phase – increased by 0.3-0.5 °C (0.54–0.9 °F) relative to the average temperature of the first phase.

This is a usual picture for normal hormone function and in a non-pregnant cycle.

If after 4 DPO the basal body temperature is still low or strongly “jumps”, it is most likely a hormonal malfunction (the corpus luteum ceased to produce progesterone) or ovulation did not occur (anovulatory cycle or egg release is delayed).

If the temperature was previously increased and on the 4th DPO suddenly drops – we could assume an early implantation. In this case, indicators would increase again the next day.

Signs and symptoms on the fifth DPO can be read about in this article.

If on the 4th day there is no blood smear or no BBT drop with a subsequent increase on the next day – it is too early to do the test.

The best time to take the test is after noticing signs of implantation or first symptoms of an early pregnancy. There are multiple signs of early pregnancy. In most cases, they begin on the 8th-14th DPO. You can read more about them in this article on ovulationdiary.com.

In the absence of any signs of conception after ovulation, you can start doing tests after the 8th DPO, when the embryo could theoretically have been implanted. Repeat the tests every 2 days (hCG doubles).

Have a successful planning!

4 Day past ovulation (DPO) in case of Pregnancy!