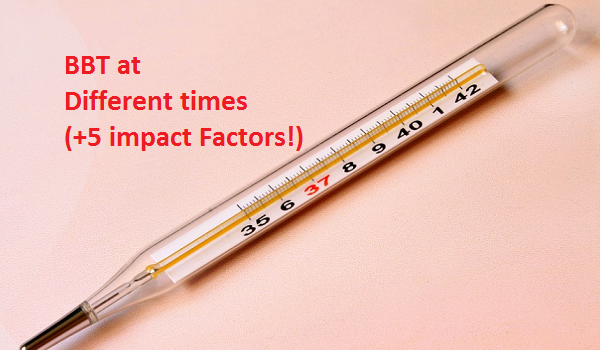 Basal body temperature (BBT) measurements shall be taken ONLY in the morning on waking. The BBT during the day and in the evening is always increased on several tenths of degree, thus is not informative. In order to obtain exact results, it is required to observe rules for measurement and consider factors that can affect the result: sexual intercourse, alcohol, disease, hormone preparations and last but not least pregnancy.

The chart accuracy, and accordingly the adequacy of conclusions and the assigned therapy, depends on how correctly the measurements were taken. Further details about basal temperature during the day and in the evening, as well as factors that can affect measurement results, are described below.

How the BBT changes during the day

A basal body temperature shows a human temperature in the complete rest state. On its results the BBT chart is chartd during the cycle. The change of basal curve helps to detect an ovulation and in general trace a woman reproductive system operation, i.e. hormone operation.

The day and the evening BBT are not informative, because a woman, by this time:

The basal body temperature difference after awakening and in the evening is significant. It is always increased in the evening. The only correct measurement time is an early morning, after three- six hours of deep and undisturbed sleep.

How the BBT changes during ovulation

The first follicular phase ends with ovulation. The basal temperature in the beginning of ovulation also corresponds to this phase, as it is lower in comparison with the second phase.

After an egg retrieval, the Corpus Luteum starts to actively produce the progesterone and the BT increases. The increase can be rapid, on several tenths of degree at once and on the next day after ovulation a clear surge is observed. However, it can be gradual as well.

The main feature of normal ovulation and the Corpus Luteum operation is the basal body temperature within the range corresponding with the second phase, approximately after 3 days.

Please refer to the following chapter for information on how to determine an ovulation proximity according to the BBT chart.

The Human chorionic gonadotropin injection doesn’t affect the basal body temperature, it stimulates the ovulation. Usually, the mature egg is released within one-two days after stimulation. It is also possible that BBT decreases on 0.1-0.2 °C (0.18-0.36 °F), but it is perfectly normal.

The BBT starts to increase after ovulation and the chart shows a surge. If within three days the increase hasn’t started yet, then the egg releasing didn’t happen.

How the BBT changes upon pregnancy

Upon pregnancy the basal body temperature stays on the second cycle phase level with unfailing regularity. Exclusions can arise only due to progesterone deficiency. In such cases even an impregnation probability is questioned, because progesterone is a hormone supporting a pregnancy.

If the temperature is low in the second phase, do not fall into panic! Many people make this mistake by evaluating the chart and fail to notice a temperature of 37 degrees and higher.

The main rule(!): It is required to make the BBT charts during three consecutive cycles. If the temperature after ovulation is increased for more than 10 days and the difference between phases is in the range between 0.3 to 0.5 °C (0.54–0.9 °F), there is no progesterone deficiency. Even if the temperature is lower than 37 °C (98.60 °F).

Now, if at the end of cycle before menstruation the basal body temperature doesn’t decrease as usual, a pregnancy is possible. Other signatures for pregnancy determination prior to missed period I explained in this article.

The basal body temperature in disease

Let’s consider a general disease with increase of body temperature (BoT) – the basal temperature in cold (ARVI) will be also increased.

If the BoT in disease is normal, it means the BBT is informative and can be considered.

A local inflammatory process in the place of measurement also increases the BBT readings in a certain body part. For example, reading will be increased, if measured:

Note (!): In order to determine informativity of a certain day indicator, it shall be compared with other indicators of the same period. If a deviation is too big (0.3 degree or bigger), it is required to make a corresponding note in the chart (ARVI, temperature, etc.) and do not consider this day.

The BBT after sexual intercourse

A regular, not extreme, sexual intercourse shall not affect the basal temperature, provided that the measurement will be taken after six hours of quiet sleep. Too active sexual intercourse during the late night (with mucous microdamages) will increase the BT.

It should also be considered a probability of inflammatory development after unprotected sex with unreliable partner. For this reason, it is required to undergo sexually transmitted diseases (STD) assessment by both partners before starting the planning.

Does the basal body temperature increase after drinking alcohol?

In most cases alcohol increases the BBT. However, the point is not with alcohol itself, but its’ quantity. A swig of Martini or 100 ml of white wine will not cause any effect. A big quantity of strong spirits (cognac, vodka) or low-alcohol beverages (beer, cocktails) will increase the temperature on several tenths of degree.

Wild, hilarious and late celebrations with dancing and other physical activities often are accompanied by drinking alcohol that also contributes to the basal body temperature increase.

Finally, if you work in shifts or your work prevents a good sleep; or you always wake up in the early morning hours to go to the toilet, the method of ovulation determination by the BBT will not fit you. It is better to use another method of determination of high fertility period (total number of methods is 8). The better option is to try a combination of different methods.