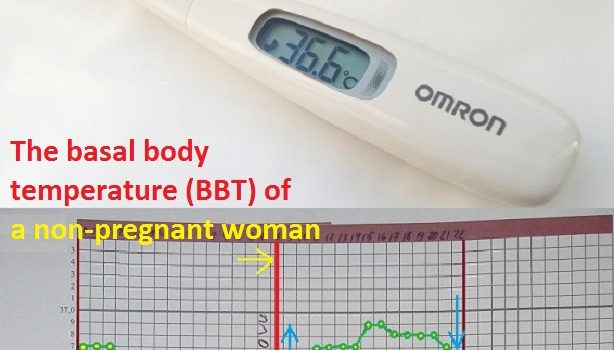 The normal basal body temperature (BBT) of a non-pregnant woman varies depending on the phase of the menstrual cycle. In the first phase, before ovulation, it is lower in relation to the second phase (after the release of an egg) by about 0.3-0.5 °C (0.54–0.9 °F).

The basal temperature chart in the absence of pregnancy

How to know (calculate? determine?) if you are pregnant or not?

It is easy to find out if conception was at the BBT. To do this, you need to analyze the BBT charts during the last few consecutive cycles. To determine the approximate values for them in two phases of the cycle:

– in the absence of pregnancy, the basal body temperature begins to fall on about 12-14 days after ovulation;

– if fertilization has occurred and the egg has successfully implanted into the uterus – elevated BBT continues to hold.

Note (!): Pregnancy is determined by the temperature in the second phase. The duration of this phase is different for all (12-16 days), but constant for the same woman (± 1 day maximum). Find out its duration – and if the elevated BBT lasts longer than this period – then you are probably pregnant.

On this page (ovulationdiary.com) you can find a detailed article about pregnancy signs with examples of pregnancy charts.

The normal BBT in the absence of pregnancy (+Charts!)