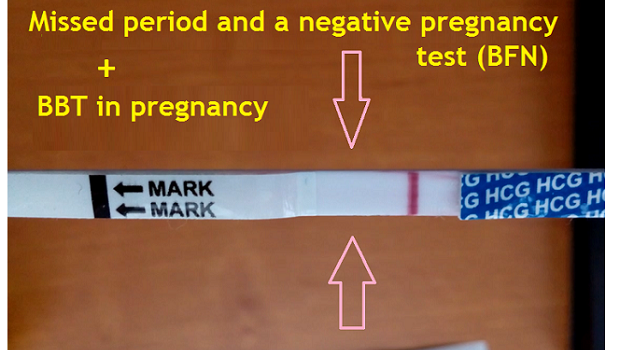 If the missed period and BBT is elevated for 16 days or more, this is a sign of pregnancy, even if the test is negative (BFN). Normally, an increase in BBT by 0.3-0.5° C (0.54-0.9° F) in relation to the indicators of phase one occurs after ovulation and lasts 12-16 days (in most cases 14). After this BBT decreases; menstruation and a new cycle begin.

In this article, what should BBT be before the missed period is discussed? How to determine the exact day of the missed period on ovulation? Is pregnancy possible if the test is negative? Additionally, how to understand what is low and high BBT? Keep reading.

What BBT should be before a missed period?

By the end of the cycle, if pregnancy has not occurred, the amount of progesterone falls. For women, this occurs at different times. In most cases, one to two days before the onset of menstruation or on the first day of menstruation.

On the BBT chart, normal indicators look like this:

How to correctly determine a low BBT?

To accurately determine whether your BBT is low or normal in the 2nd phase of the cycle, you need to compare the average temperatures before and after ovulation.

This is done as follows: all indicators of one phase are summed up and divided by the number of days in the same phase. For example, there is such a chart:

The average BBT in phase I is equal to:

The average BBT in phase II is equal to:

In the case where the difference is less than 0.3° C, it indicates a violation of the balance of hormones — this can prevent pregnancy. To establish the cause, you need to consult a doctor and test for hormones. Here is a chart with a slight temperature difference:

Here is an example of a normal pregnancy chart with a temperature of up to 37° C (98.6° F), and an acceptable phase difference:

This is interesting(!): There are abnormal charts that are far from the standard, but also pregnant with a slight temperature difference. Most likely, the reason is in external factors that distort the indicators, or an individual hormonal feature:

The given example is rather an exception to the rule. Most pregnancy charts have a temperature difference of 0.3 ° C or 0.54° F and above.

How to determine if a missed period has started

During the planning of a baby, women with a variable cycle length must know the exact date of ovulation. The duration of the follicular phase (while the egg is ripening) may vary from cycle to cycle, the second phase is always constant.

With such a variable nature of the onset of menstruation, it is impossible to set the date of the estimated missed period on the calendar. Much more informative are such methods as ultrasound monitoring, test strips on LH, fern method, basogram, and others. This article will tell you the most reliable methods for calculating ovulation in an unstable cycle.

So, to determine the first day of a missed period in irregular cycles, you need to know the date of ovulation and the individual duration of your luteal phase (phase II).

For example, ovulation was on the 5th, the duration of the 2nd phase was 15 days, then the first day of missed period will come 15 days after the fifth, that is, the 21st.

If you correctly set the first day of the missed period and this morning’s BBT did not fall and remained at the level of your usual second phase — you are probably pregnant!

If the indicators go down — wait for your period today, tomorrow or the day after tomorrow.

Even if the drop occurred in advance, 1-2 days before the missed period, this also indicates a regression (wilting) of the yellow hormone-secreting body and the end of progesterone production before the start of a new cycle.

Factors that may distort BBT

Elevated BBT during a missed period does not necessarily mean pregnancy. Here are the factors that can affect BBT in the direction of its increase:

Note(!): It makes no sense to take measurements in the afternoon or evening, or in the morning after any activity. BBT rises instantly and becomes non-indicative. Here is a detailed article on factors affecting BBT on ovulationdiary.com.

If all of the above factors are excluded in your case, then BBT on the first day of the missed period is naturally increased. Well, it’s time to do an ultrasensitive pregnancy test (10 mIU / ml). By the way, you are able to catch an early pregnancy even before a missed period!

Increased BBT with missed period, but the test is negative

Menstruation did not start, BBT in the region of the second phase (or higher), but you still have BFN? The first question to ask is, is there really a missed period?

If so, then in this case you need to continue monitoring BBT. Perhaps your period and a drop in indicators will be tomorrow.

While maintaining an increased rectal (oral / vaginal) temperature both tomorrow and the day after tomorrow, and the absence of menstruation – on the third day of missed period, the ultra-sensitive test must be repeated.

This is interesting(!): In the first 6 weeks of pregnancy, the HCG level doubles approximately every 2 days and the test strips are likely to give a positive result on the third day of missed period if conception occurs. Remember to follow the general guidelines for proper testing. If there is already HCG in the urine, the test strips will probably «detect» it.

In the case when the home tests on the 1st and 3rd days of the missed period are negative and there are no monthly periods, and the BT remains elevated, the best way out is to do an analysis on beta-hCG (general). This will say 100% whether there is a pregnancy or not.

By low BBT, I mean indicators that are lower than your usual second phase, closer to the level of the first phase. There are 3 possible types of charts:

There are several characteristic types of behavior of the basal curve in early pregnancy. If you notice this on your chart for the 7-14th day after ovulation (DPO) — it’s time to do the test! These 4 signs are implantation dip, the third phase on the chart, there is no ordinary drop and a more «beautiful» line.

Read more about BBT dip during implantation here on ovulationdiary.com.

After about 7-10 days from the moment of ovulation, the indicators became higher than the average level of the luteal phase. Examples of charts can be found in this article.

No fall at the end

There is no usual decrease in BBT a day or two before the onset of menstruation. The temperature has remained the same or has risen. Examples of charts are in this material.

In this way, not seeing the standard temperature drop a day before the missed period, I realized that I was pregnant!

The temperature difference on the chart is more distinct

In the pregnancy cycle, the temperature difference on the chart is more distinct, for example, the BBT line is lower before ovulation and higher after it, or the line is even smoother.

Note(!): The «beautiful» chart of BBT is rather an indirect sign indicating that in this cycle the ovaries and the pituitary worked better, and the correct level of hormones was most favorable for conception and fixing of the ovum. Therefore, in this planning cycle, you were more likely to get pregnant.

Do you want to learn other home-based ways to detect pregnancy early? Then I advise you to read this article.

So, to summarize. In case of pregnancy, with a missed period, BBT is increased to the level of your second phase of the cycle (or higher). It may well happen that the test on the first day of the monthly missed period gives a negative result — this is normal, since it is completely normal that there is still not enough HCG in the urine.

The day after this, the ultra-sensitive test will most likely be positive. If it’s not positive, but the temperature has not dropped and menstruation has not begun, a blood test for beta-hCG should be done. The test can be done earlier, before the missed period, if on the BBT chart you notice one of the four characteristic lines of the curve’s behavior.

Good luck with all of your efforts!

BBT with a missed period – a negative test (+ Charts!)