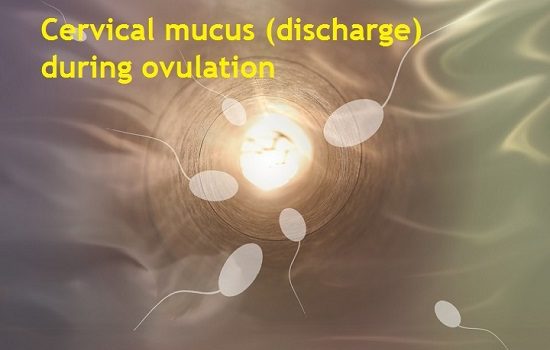 Shortly before ovulation, secretions (cervical fluid) become abundant and look like raw chicken egg protein (egg white). Transparent and slippery (stretchable, over 4 cm long). Increased vaginal secretions feel wet and slippery. In such an environment, it is much easier for sperm to overcome the cervix. This is the best time to plan your baby.

In this article, we will dwell on such a delicate topic as vaginal discharge, describe how the nature, color and amount of vaginal secretion changes throughout the monthly cycle phases. This is another method of calculating favorable days for conception.

The appearance, consistency and amount of secretions provide an additional opportunity for a young woman to determine the best time for conceiving a baby. By analyzing the quality of mucus, secreted from the cervical canal at any stage of the monthly cycle, it is possible to identify hormonal problems.

It is important to know(!): Analyzing the quality of mucus is not the most reliable and indicative method for a beginner. Works better in conjunction with other signs and methods of calculating ovulation. It is better to purchase LH tests – they determine fertility with high accuracy of 99%, or measure BBT (basal body temperature) fluctuations for at least three consecutive cycles to determine the day of the egg’s release.

The vaginal secretion in the first phase of the cycle

Prior to the ovulatory period, the level of estrogen rises, its peak about two weeks before the end of the cycle (you can detect the peak by the mucus quality – it becomes more liquid and stretchy).

About 3-7 days prior to the egg release, the transparent or transparent-white cervical mucus is viscous and sticky, with a creamy structure and is released in a small amount. This consistency makes it difficult for the sperm to move (non-fertile period of the cycle).

How many days before the egg’s release does secretion (egg white) begin?

In the pre-ovulatory period, some women do not notice changes in cervical mucus at all. Basically, vaginal discharge of raw egg white consistency is a clear signal of imminent ovulation (within a day or two). Both detection options are common, for some, the method is suitable, for others not.

Any bloody or brownish discharge after the end of menstruation and before the onset of the ovulatory period should alert you and require medical advice.

Discharges before and after ovulation, during a 28-day cycle* 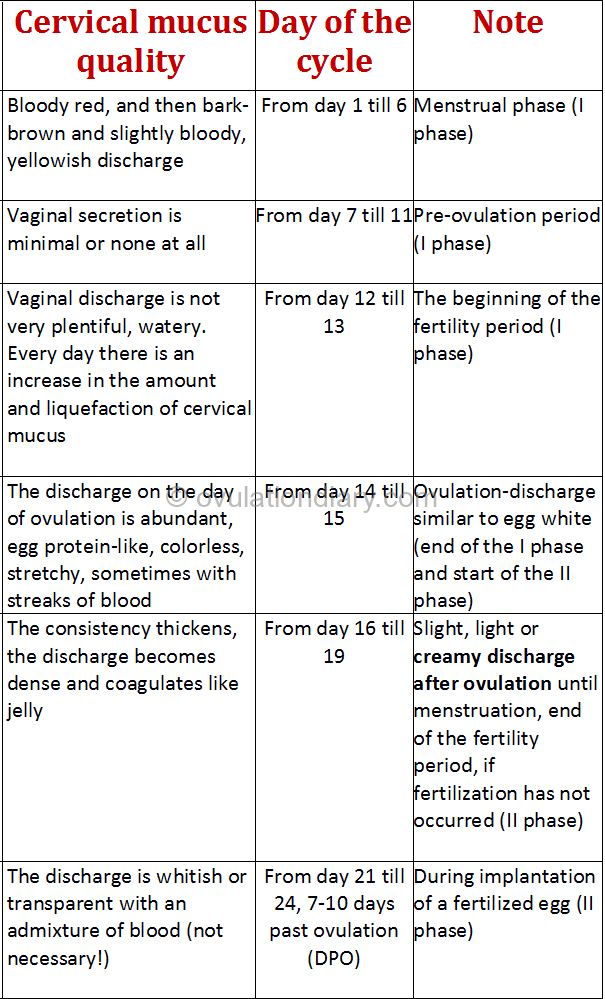 *The data are averaged, and are tied to a cycle length of 28 days. Cycle – is evaluated subjectively, therefore, an individual deviation is possible.

In color and consistency, the discharge resembles raw egg white the day before ovulation or on the day of ovulation. It is viscous, slimy, transparent, without a pungent odor. Sometimes streaks of blood are possible, just a few drops if a vascular burst upon follicle rupture (normally no longer than 1-2 days).

Note(!): Due to the mucous structure of secretions, sperm cells very easily move around. The most active swimmers get into the cervix approximately one hour after the intercourse. And after 6 hours could reach the egg.

How many days before ovulation does mucus appear?

An increase in estrogen level in the middle of the cycle (in case of 28-day cycle), dilutes the cervical mucus to facilitate the male sperm movement in the uterus and tubes, thereby facilitating the conception process.

Amount (on average) of about a teaspoon of mucus is discharged a day or two before the egg is released, the smell is slightly sour or not at all. These signs may vary slightly between women. For example, mucous secretions appear only on the day of ovulation.

Discharge with blood during ovulation

Slight bloody or brown discharge on the day of ovulation and the day after – is absolutely normal. As a result of follicle rupture and possible damage of a small blood vessel, some blood may be released.

During the ovulation period, discharge with blood should not alert you. But it should stop no later than the next day.

The main condition(!): There should be no discomfort, itching, pain, burning or redness in the perineum.

How many days of mucus discharge during ovulation period?

As long as the level of estrogen rises (1-2 days average). It can happened 6-48 hours before ovulation.

After ovulation the egg is fertilization ready for about 24 hours. Up to 24 hours before its complete decay. Therefore, the secretion, characteristic for this period, begins to thicken after two days, due to increased progesterone production.

The lack of secretions during this period may indicate insufficient estrogen production (again, each assessment is subjective). If mucus is not discharged during ovulation at all, it is also unlikely that the egg would be released.

However, the possibility of conception is not completely ruled out. It is better to try another method for determining ovulation, according to LH tests, basal body temperature or an ultrasound.

Colorless creamy discharge during ovulation days may also indicate that the egg release date is incorrectly determined and you still need to wait, or, conversely, the egg release has already occurred. In addition, an anovulatory cycle is possible.

Under the influence of progesterone, vaginal secretion begins to thicken to a cream consistency, acquiring a whitish hue. A small colorless discharge after ovulation in a small amount is considered absolutely normal if they are odorless and there is no discomfort in the perineum.

Watery copious discharge after ovulation is normal for a day, a maximum of two days, after sexual intercourse. This way microflora is cleared of alien male secretion. In other cases, medical advice is required.

When possible implantation is ruled out, pinkish-bloody discharge is not considered the norm. It could be caused by:

What is the discharge like after ovulation, if conception occurred

One of the main signs of successful fertilization – is a special mucus emerging from the cervical canal, 7-10 days after the egg leaves the follicle. Such mucus is in small quantities, and resembles jelly.

Bloody discharge or blood clots in the mucus a week after ovulation, might appear due to the fetal egg implantation into the uterus and damage of small blood vessels. Read more about implantation bleeding here.

It is important to know(!): When expecting pregnancy, spotting red-brown hue (not during the period of possible implantation) may be signs of an ectopic pregnancy or a threatened miscarriage. When these symptoms appear, especially accompanied by pain in the lower abdomen, you must consult a doctor as soon as possible.

According to statistics, about a third of women during pregnancy experience vaginal thrush (candidiasis). This happens due to hormonal changes after conception, as well as a natural decrease in immunity (which helps the embryo gain a foothold in the uterus).

If itching or discomfort, redness and swelling in the perineum occurs, it is recommended to visit a doctor and use ONLY local antifungal drugs (if vaginal thrush is confirmed).

Have a successful planing!

What does your Discharge look like when you are Ovulating?