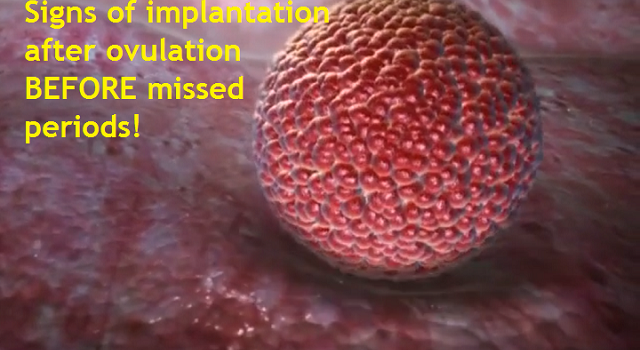 Implantation occurs on the 7-10th day past ovulation (DPO). The most common signs of implantation:

How does embryo implantation work after ovulation

If, at the end of ovulation, the egg merges with the sperm, the next, extremely important stage of its evolution begins. The implantation into the uterine wall should take place. This event completes embryogenesis, and the fetal development phase begins.

For some pathologies, implantation risks not taking place or embryo rejection will quickly occur. The task is also complicated by the fact that a fertilized egg (zygote) contains male genes alien to the woman’s body. “Implantation from a kindred miracle!” – says folk wisdom and modern medicine partly agrees with this statement.

Having penetrated the uterus, the zygote gets rid of the outer protective membrane. Then gradually fixes into the endometrium. After implantation, the egg becomes a full-fledged embryo and develops further due to the beneficial substances contained in the cells of the uterine wall. But if something went wrong, the body rejects the embryo and everything ends with menstruation.

The success of implantation is affected by:

This is interesting(!): In unusual situations (Frozen Embryo Transfer, woman’s age from 35 years, IVF), the increased thickness and density of the outer layer of the zygote can become a cause of complications.

On which day of ovulation does implantation occur?

It is not possible to determine the exact day of embryo implantation after ovulation. The situation is developing according to an individual scenario.

The zygote appears in the uterus on the 4-6th day past ovulation. After 1-2 days, it begins to invade the endometrium. It lasts for about 40 hours. The process may be periodically suspended and intensified.

In most cases, implantation occurs on the 7-10th day after ovulation.

As medical practice shows, approximately 2% of women experience this event on the 5-6th DPO, 2.8% – on the 12th DPO. Many gynecologists consider the completion of implantation the formation of a functional placenta during the 20th week of gestation.

Signs of embryo attachment to the uterus after ovulation

The introduction of the embryo into the wall of the uterus dramatically disrupts the usual functioning of the body, accompanied by a violation of its upper layers and blood vessels. Along the way, there is a rapid change in the hormonal background.

If the embryo is attached after ovulation, blood and urine tests will show a double increase in the concentration of HCG (a hormonal substance synthesized by the tissues of the ovum) every one and a half days. The situation changes only after the 5th week of pregnancy. Thus, a pregnancy test before delay can give a positive result already on the 8-14th DPO (the days past ovulation).

Here is an article where I mentioned all the most likely symptoms and methods for determining an early pregnancy before missed periods.

Analysis of changes in basal body temperature is a simple and quite informative way of gynecological diagnosis.

The conception chart, compiled on the basis of daily rectal (oral or vaginal) temperature measurements in a state of complete rest, a stable 35-day menstrual cycle, it looks like this (see the chart above):

How long does the implantation dip of BBT last

The basal body temperature retraction lasts no more than a day, after which the BBT rises and returns to the normal limits of the luteal phase of the cycle.

Implantation retraction on the basal body temperature chart indicates the beginning of the active production of estrogen (lowers temperature) after the onset of pregnancy. This is a fleeting process.

Is there always an implantation drop of basal body temperature

Implantation retraction does not always accompany the process of embryo fixation. Of course, it may be difficult to identify this characteristic sign of pregnancy. Gynecologists note and numerous «pregnant» BBT charts confirm that about 75% of expectant mothers could not clearly track the phase of implantation retraction in their basal charts.

In order not to miss an important period, you should study the features of your body well. It is necessary to monitor daily fluctuations in basal body temperature for at least three months in compliance with the rules of measurement.

According to statistics, bleeding accompanies embryo implantation in approximately 20% of expectant mothers. This is a natural phenomenon since the penetration of the egg into the wall of the uterus is accompanied by a hormonal burst, a violation of blood vessels and tissue integrity.

Any non-compliance with these criteria should alert. Severe pain, profuse and clot discharges during the implantation may indicate sexual infections, various pathological conditions: ectopic pregnancy, threatened miscarriage, inflammation, epithelial damage and other problems.

There is a separate article on ovulationdiary.com about all the signs of implantation after which a pregnancy test can become positive.

I wish you a planned, easy and healthy pregnancy!

Signs of implantation after ovulation (BEFORE missed periods!)