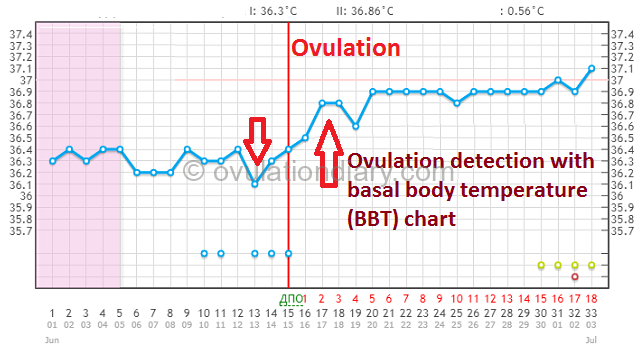 When the basal body temperature (BBT) drops by 0.2–0.4 °C or 0.36–0.72 °F, this would indicate ovulation occurrence in about 12–48 hours. But such a drop doesn’t always happen. The BBT growth starts immediately after the egg release, and in three days the indicators would show approximately 0.3–0.5 °C (0.54–0.9 °F) increase compared to indicators before ovulation.

What thermometer for measuring basal body temperature would determine the ovulation?

For this measurement, you could use a mercury or electronic thermometer. Each of them have their own advantages and disadvantages.

expensive, more difficult to care for, batteries may suddenly run out, you may not hear the sound signal.

A more detailed article on choosing the best BBT thermometer is on this page (on ovulationdiary.com). The basic rules for measuring BBT, as well as hints on properly recording it in the BBT chart, are here.

At what basal body temperature does ovulation occur?

So, the onset of the egg released from the follicle is preceded by a powerful release of luteinizing hormone (LH) in combination with increased estrogen production.

Each woman has her own BBT curve – only the difference between each phase of the cycle matters.

Important (!): Measurements should be carried out by the same thermometer, since each has its own specific level of error. In a basal body temperature chart the single measurements aren’t as indicative as the curve changes throughout the cycle.

Based on the change in the temperature curve, it is not always possible to predict the imminent ovulation onset, since, in the two-day period before ovulation, the indicators wouldn’t always drop.

Also, the line would remain at the average level of the first phase. In this case, it is better to use additional methods – folliculometry, tests for LH levels, monitoring the cervical fluid, etc.

Here is an example of how an ovulation curve, without the BBT drop, looks like on the chart:

After analyzing the BBT chart, we can surely determine that ovulation has already occurred, provided that the measurements had been taken correctly. Since the temperature rises for three days after ovulation has occurred. Gradually or spasmodically, depending on individual predisposition, by about 0.3-0.4 °C  (0.54–0.72 °F), sometimes higher.

If the cycle is stable – the chart would help with establishing the exact ovulation date, because the BBT curve would change throughout the cycle in a regular manner. That would allow the exact timing of fertile period for successful pregnancy planning.

If the cycle is unstable – it is necessary to observe the basal curve (combined with sexual intercourse every 2-3 days) and as soon as the temperature starts to go up (next day after ovulation) – controlled planning.

More detailed information on reliable methods of ovulation calculation with irregular cycle can be found here.

Could the basal body temperature NOT detect the ovulation?

Basal body temperature will not be indicative and may not show ovulation if:

If all of those are excluded, then BBT would respond by changing throughout the cycle according to hormonal fluctuations.

The fact of ovulation occurring can be recognized by the onset of a basal body temperature increase. After 12-16 days menstruation should begin (the duration of the second phase is individual, but constant for each cycle).

If there is no menstruation and BBT is elevated, an ultrasensitive pregnancy test can be done. Read further on basal body temperature during menstrual delay in this article on ovulationdiary.com.