Pregnancy is possible in a week after menstruation begins. According to statistics, in about 8 out of a thousand pregnant, ovulation occurred immediately after menstruation, that is, on the 7-9th day of the cycle (DC). If intimacy takes place in the three-day period before, ovulation day and the day after egg release – there is a high probability of fertilization.

In this article, the difference between normal ovulation and ovulation right after menstruation is discussed. Are there any special symptoms and feelings during this period?

How will the pregnancy go after the early conception, and also when it will be possible to take the first test.

How many women get pregnant right after menstruation?

To find out how many successful conceptions occurred on the 7-9th DC, I looked at more than 3700 pregnant BBT schedules. This took about 30 hours of careful study of each review. Obviously, individual charting mistakes were, but the general trend is still clear – it is possible to get pregnant after menstruation and there are real examples.

The final diagram for the ovulation frequency on each day of the pregnancy cycle is as follows: 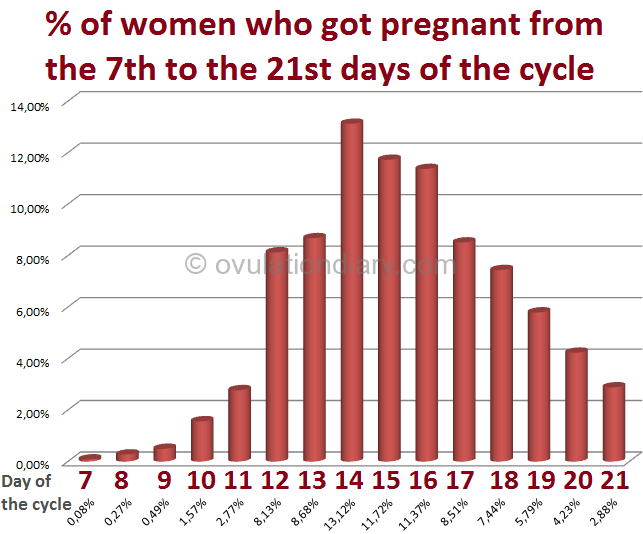 In total, it turns out that approximately 8 women out of 1000 cases of pregnancy ovulated immediately after menstruation. Moreover, intimacy occurred at different times – one, two, three days before the follicle rupture and on the day of ovulation.

If intimacy occurs, for example, on the 4-5th DC, and ovulation after 2-3 days, it is considered that the woman got pregnant just during menstruation, although this is not entirely true. Conception occurred later – after ovulation, and during menstruation the sperm entered the woman’s body and safely waited there for the release of the egg.

Signs of ovulation right after menstruation

Symptoms of an early egg release are the same as the standard set of signs in the classic version on the 13-15 DC.

It is interesting (!): The ability to fertilize a rapidly matured egg is the same and does not stand out. The speed of maturation and rupture of the dominant follicle is simply an individual feature of the body. Early ovulation does not require treatment, if followed by a full 12-16-day second phase (from ovulation to the beginning of the menstruation).

If you are planning for pregnancy, you can start tracking ovulation from the fourth to fifth day of the cycle. You can use 8 good tested home methods for calculation:

A very detailed article about all these methods with explanation and examples is on this page.

In most cases, one-two days before or on the egg release day woman:

From experience (!): A day or two before ovulation, I feel a bursting pain in the right or left abdomen. The nature of the discharge changes and my libido rises. On ovulation day, it hurts me to sit down (strongly puts pressure to the rectum), and painful defecation. The next day, the sensitivity is slightly dulled, and a day after ovulation, the discomfort disappears completely (like transparent discharge).

Read more about all the possible signs and sensations by which you can determine ovulation in this material.

Here are examples of successful basal temperature charts with links to review of when ovulation occurred very early, but nevertheless the pregnancy was successful.

The following table is based on the length of your short cycle – from 21 to 25 days.

Choose the number of days and find out on which DC ovulation is expected to occur after menstruation and how soon after intimacy you can get pregnant. 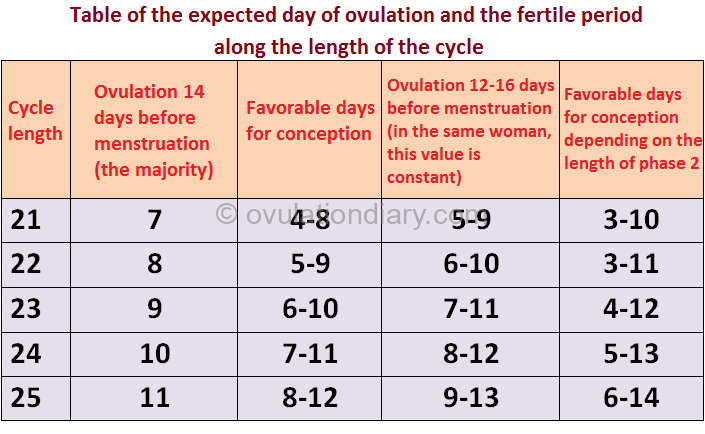 Regular intimacy every 2-3 days in a favorable period for conception will maximize your chances of becoming pregnant right after your menstruation.

If fertilization occurs after menstruation, when do I take a pregnancy test?

The first ultrasensitive test (10 mIU/ml) can be done already 7 days after ovulation, that is, on the 15th DC. The fact is that implantation occurs mainly on the 7-10th day after ovulation, and from that moment pregnancy can be detected using the test. If the test is negative, it can be repeated after one day and so on.

The second option, when you do not know the exact date of ovulation, is to start taking tests after the appearance of early signs of pregnancy (implantation bleeding, BBT depression, symptoms of intoxication and other body tips).

There is a very detailed article about the symptoms and signs of pregnancy before a delay of 8-14 DPO.

What is the difference between pregnancy after early conception on 7-9 DC?

According to the analysis of basal temperature charts, the frequency of abortion during early ovulation is the same as with classical or late ovulation – 10-20%.

Pregnancy and the baby develop in the same way as with the standard period of conception.

For successful carrying, the ovulation date does not matter, but the difference in basal temperatures between the phases (minimum 0.3 °C or 0.54°F) and its stability are important. Lack of severe pain and prolonged discharges.

Advice (!): Suddenly terminated pregnancy is a sad thing. However, do not grieve, and even more get depressed about this. Remember, you got pregnant once, so you can still get pregnant. It happens that an egg and a sperm with chromosomal and gene pathologies are fertilized and such an organism is not destined to survive by nature. Be optimistic and get pregnant again.

If you are not planning a pregnancy

Women with a short (21-25 days) or irregular cycle (sometimes short), who are not planning to become a mother in the near future, are advised to start protecting themselves from the third or fourth day from the beginning of menstruation.

The fact is that sperm can retain fertility for up to three days (very rarely up to five). It follows that unprotected intercourse two or three days before ovulation may well end in pregnancy.

Methods for determining the safe period after the beginning of menstruation

Attention (!): The calendar method will not protect against pregnancy by 100%. There are failures in the cycle with spontaneous release of the egg or double ovulation. For reliability, in addition to the calendar method, it is recommended to use other methods for determining ovulation.

2. Ovulation tests should begin 3 days before the expected day of egg release, from the 4th-6th DC, if your regular or irregular cycle lasts 21-25 days. When on the test strip the second strip is almost as bright as the test strip, you should stop living sexually openly. Read more about using ovulation tests in a separate article.

3. Basal thermometry, unfortunately, rarely shows the coming ovulation (a drop of 0.2-0.4 °C or 0.36–0.72 °F, which means that in the next day or two there will be an egg release). According to the chart, it is difficult to establish the start date of the “dangerous days”. However, if there was a jump in BBT by 0.3-0.5 °C (0.54–0.9 °F) and this increase has lasted for three days, then the fertile period (when conception can occur) has ended. On this page you can read more about the method of calculating ovulation using BBT.

Other methods are ineffective, since signs of imminent ovulation appear a day or two before the egg is released, and sperm live up to three days.

Let’s sum up the results

You can get pregnant right after menstruation. There are real stories of such pregnancies starting from the 7th DC. Such an egg and the course of further pregnancy is no different from the conception that occurred during the standard period.

The main signs of the coming ovulation begin a day or two before the rupture of the follicle: one-sided pain in the lower abdomen, cervical mucus by the type of protein, and an increased libido.

All readers should be happy and have their wanted pregnancies!

Statistics of pregnancies 7-9 days after period!