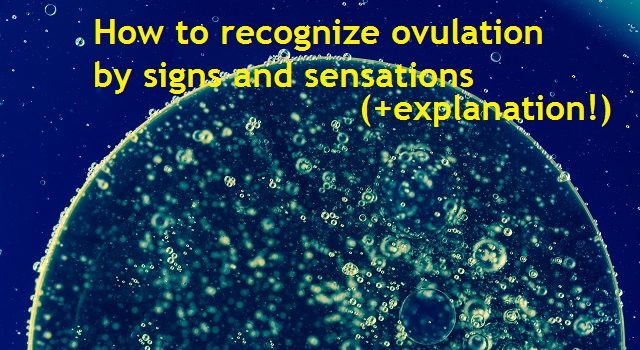 The onset of ovulation is often accompanied by such symptoms:

Discharge of egg white consistency and spotting during ovulation

Vaginal discharge of raw egg white consistency is a clear signal of imminent ovulation (within a day or two).

Sometimes during a follicle rupture a small blood vessel bursts, resulting in a little bleeding, but not more than a few drops and no longer than for a day. The definitions of ovulation by cervical mucus are described in detail in the article on discharge during ovulation).

Pain in the ovaries, uterus and lower back – are most often felt during ovulation. Self-massage, relaxation and a peaceful bath will help to reduce soreness.

Another reason is if the released fluid, after follicle rupture, presses on the nerve endings thereby causing their irritation. Read more about ovulatory pain in painful ovulation.

After ovulation, progesterone begins to be produced intensively. Consequently:

Those symptoms, characteristic of some women, can indicate whether ovulation has passed. The feeling of fullness and sensitivity accompanies almost the entire second phase of the cycle until the menstrual period.

What should alert you?

There are several possible reasons.

However, nausea itself cannot be considered as a separate symptom after ovulation, but only in combination with other symptoms. Moreover, nausea would certainly be a recurring part of your cycle (at least periodically).

From experience(!): I, for example, often feel slight nausea on ovulation day, regardless of what I ate that day. Mine is caused by the first reason. I was even more sick during both births, also slight nausea occurs from time to time after intimacy (after experiencing an orgasm). All these symptoms, in my case, are associated with the active production of prostaglandins.

When the ovary is releasing a mature egg, some women experience an increased level of androgens (male sex hormones). In addition to the hormone fluctuations, the production of sebum increases. Moreover, its density and viscosity change. This leads to pores blockage and the inflammatory process in them. So blackheads and acne occur. Over time, the level of androgens decreases and the skin clears in 4-5 days.

The desire for intimacy is a very common sensation during ovulation. Most often, libido gets stronger 2-3 days before ovulation, with an increase in estrogen levels. During this period, the consistency of cervical mucus changes and the woman feels constant moisture, resulting in sexual desire.

Note(!): If there is more cervical fluid and it has acquired the structure of crude protein, as well as an increase in sexual desire – this almost certainly would indicate the approaching ovulation. This is the most favorable period for a successful conception. It’s time for intimacy.

Increased gas formation during the ovulation period, occurs due to fluid retention in the body, as a result of estrogen level fluctuations. If you cannot determine the obvious nutritional causes of bloating and flatulence (appears and disappears suddenly after a day or two) and it is recurring every cycle – this is another symptom of ovulation.

Is there ovulation without symptoms?

There is a separate chapter on the chances of getting pregnant in the days before and after ovulation.

If menstruation did not start on the expected day, this is definitely a delay and you could do pregnancy testing.

8 Signs and Sensations during Ovulation (+explanation!)